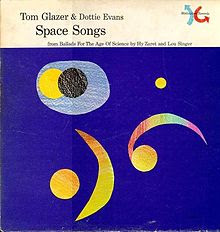 Space Songs is an album in the "Ballads For The Age of Science" or "Singing Science" series of scientific music for children from the late 1950s and early 1960s. Songs were written by Hy Zaret (lyrics) and Lou Singer (music). "Space Songs" was released in 1959 by Hy Zaret's label "Motivation Records," and was performed by Tom Glazer and Dottie Evans.

Some of the songs from this album - and the early scientific music records - are available to listen to at YouTube.

Track listing"Zoom A Little Zoom"
"What Is The Milky Way?"
"Constellation Jig"
"Beep, Beep"
"Why Does The Sun Shine?"
"What Is A Shooting Star?"
"Longitude And Latitude"
"It's A Scientific Fact"
"Ballad Of Sir Isaac Newton"
"Friction"
"Why Are Stars Of Different Colors?"
"Why Do Stars Twinkle?"
"What Is Gravity?"
"Planet Minuet"
"Why Go Up There?"

Space Songs in Popular Media
The song "Zoom a Little Zoom" has notably been used in the popular online vlog Rocketboom as its theme song.

On September 27, 2005 episode of Rocketboom featured the songs "Why Do Stars Twinkle?" and "Beep,Beep".

The band They Might Be Giants has recorded cover versions of two Space Songs, "Why Does The Sun Shine?", and "What Is A Shooting Star? (A Shooting Star Is Not A Star)", as well as a reply to the former called "Why Does the Sun Really Shine?" which corrects scientific errors in the original.

In 2008 Chloé Leloup, Miss LaLaVox und Achim Treu reworked the album under the title "The Space Songs - Ballads for the Age of Science". The album was released on the label Sopot Records.

The lyrics of the first stanza of "Why Does the Sun Shine?" also appear verbatim in the book Stars: A Golden Guide, apart from the omission of "its core is" before "a gigantic nuclear furnace.

The Convenience of the Kindle